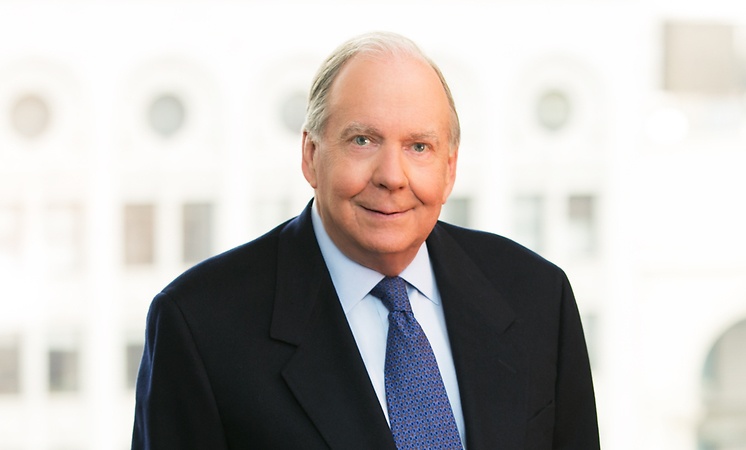 Thomas A. Demetrio, co-founding partner of the legendary law firm Corboy & Demetrio, is a nationally renowned trial lawyer.  Thomas received his undergraduate degree from the University of Notre Dame and law degree from IIT-Chicago Kent College of Law.  A proud U.S. Veteran, Thomas served in the Army Reserve for six years.

One of his early milestones was acquiring the first 8-figure compensatory verdict in Illinois.  Thomas has since acquired well over $1 billion in verdicts and settlements.  All of his verdicts have been paid, and he has never lost an appeal.

Thomas has been ranked the #1 lawyer in Illinois by Super Lawyers for each of the past six years.  Super Lawyers, part of Thomson Reuters, is a research-driven, peer-influenced rating service of lawyers who have attained a high degree of peer recognition and professional achievement.

Thomas has been included in Best Lawyers in America in every edition since 1987.  He received the #1 ranking as the top aviation plaintiffs’ lawyer by Illinois Leading Lawyers in 2019.  In 2014, The National Law Journal named Thomas to its inaugural “Top 50 Litigation Trailblazers and Pioneers,” and in 2019, the National Trial Lawyers named him to:  “The Roundtable:  America’s 50 Most Influential Trial Lawyers.”  In 2015, the prestigious Lawdragon, which has anointed Thomas “Dean of the Chicago Trial Bar,” selected him for “Legends of the Bar,” as one of only 50 lawyers nationwide who had been selected every year since its inception, for its 500 Leading Lawyers in America, joining a select group that includes U.S. Supreme Court Chief Justice John Roberts.  In 2021, Lawdragon published its 15th anniversary issue, featuring some of its legends, including Thomas, who it inducted into its Hall of Fame with 36 other highly distinguished honorees including Justice Ruth Bader Ginsburg.

A leader of the bar, Thomas has served as President of the Illinois Trial Lawyers Association and the 22,000-member Chicago Bar Association.  He is an internationally sought after lecturer on trial techniques and advocacy skills and has authored more than 60 professional articles.

Thomas currently serves on the Board of Advisors of IIT-Chicago Kent College of Law and previously served as its long-time Chairman.  He has been President of its Alumni Association and has been honored by being named as one of its 125 Alumni of Distinction.  He is a recipient of its Alumni Merit Award, Professional Achievement Award, and Distinguished Service Award.

Thomas currently serves on the boards of the Center for Disability & Elder Law and Big Shoulders-Archdiocese of Chicago.  He has previously served on the boards of:  Illinois Institute of Technology; St. Ignatius College Prep; Mundelein Seminar; Notre Dame Law School; Dispute Resolution Research Center of the Kellogg Graduate School of Management, Northwestern University; and the Constitutional Rights Foundation Center.

While Thomas served as president of the Chicago Bar Association, he wanted to impact the lives of Chicago’s underprivileged children who, he sensed, would greatly benefit from quality mentoring. The Thomas A. Demetrio Award of Excellence was thus created recognizing the efforts of exceptional tutor/mentoring programs in Chicago communities.  In 1995, with Thomas’s inspiration, guidance, and support, the CBA and Chicago Bar Foundation created the Lawyers Lend-A-Hand to Youth program, which continues to thrive today.  In addition to the annual Demetrio Award, it has granted over $1.6 million to mentoring programs for underprivileged youth in the Chicago Area.

Medical Malpractice Lawyer of the Year in Chicago by The Best Lawyers in America, 2011

Inducted into Lawdragon Hall of Fame, 2021

One of the inaugural 50 named as Litigation Trailblazers & Pioneers by National Law Journal, 2014

One of 125 Alumni of Distinction, IIT Chicago-Kent College of Law, 2013

American Inns of Court, Chicago Inn of Court, Master of the Bench

Big Shoulders, Archdiocese of Chicago, Board of Directors,

Center for Elder & Disability Law, Board of Directors

Lawdragon - Inducted into Hall of Fame in 2021

Trial Lawyers for Public Justice, Board of Directors

Who's Who - Crain's Chicago Business, 2006-present

American Board of Professional Liability Attorneys

Chicago Inn of Court, Master of the Bench

Illinois Institute of Technology, Board of Trustees, 2011-present

The Center for Conflict Resolution, Board of Directors, 1990-1993

The Lawyers Club of Chicago

The Society of Trial Lawyers

Big Shoulders - Archdiocese of Chicago, Board of Directors, 1993-present

Center for Disability and Elder Law, Board of Directors, 1990-present

Knight Commander of the Equestrian Order of the Holy Sepulchre of Jerusalem, 1992-present