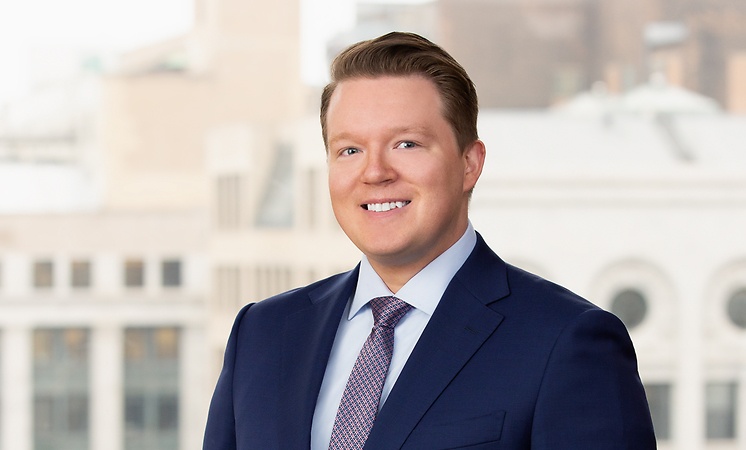 Michael Ditore joined Corboy & Demetrio in 2018. He practices in all areas of personal injury law.  Prior to joining the firm, Mike served as an Assistant State’s Attorney from 2013 to 2018 advocating on behalf of victims of crime.  While serving as a prosecutor, he litigated over 500 cases, including felony and misdemeanor jury and bench trials.  Mike worked extensively on high-level felony matters including first-degree murder cases.

Mike also worked as a law clerk for the Cook County State’s Attorney’s Office from 2012 to 2013.  He assisted prosecutors in numerous felony bench trials and motions to suppress evidence.  He also successfully prosecuted a Class X felony case that was later affirmed by the Appellate Court.  In 2011, Mike worked as a Judicial Clerk for Cook County Circuit Judge Susan Zwick.  In that capacity, Mike drafted numerous memoranda regarding a broad range of issues including the Illinois Governmental Employees Tort Immunity Act.

Mike was also named to Illinois Rising Stars for the third year in a row in 2022, an honor limited to 2.5% of eligible attorneys in the state who are selected as a result of nominations, independent research and peer evaluation.

In addition, Mike was named to Emerging Lawyers by Leading Lawyers, an honor given to fewer than 2% of attorneys in the state in 2021 and 2022.

In 2020, Mike was named to the prestigious 40 Under Forty by the Chicago Daily Law Bulletin and Chicago Lawyer magazine, and he was selected out of 1500 applicants.

In 2022, Mike obtained a $4.25 million settlement for 17 year old  who was injured after the vehicle the teen was a passenger in crashed as it was chased by police at high rates of speed.

Mike was listed in Top 50 Verdicts in Illinois in 2019 for a $2.6 million jury verdict he and Partner David R. Barry, Jr. obtained in a medical malpractice case. Since 2018, Mike has been selected to The National Trial Lawyers: Top 40 Under 40.

Mike attended Loyola University Chicago School of Law from 2010 to 2013 where he was selected as a top trial advocate in the nation.  Mike was twice chosen to be a member of the elite Corboy Fellowship in Trial Advocacy, a scholarship and intensive trial advocacy training program awarded to only the top advocates at Loyola.  As a Corboy Fellow, Mike was a national champion.  Mike also received the prestigious Joan Marie Corboy Scholarship for Leadership and Trial Advocacy, awarded for demonstrated leadership and superior abilities in trial advocacy.

At Loyola, Mike also participated in a program sponsored by the university that taught high school students about their constitutional rights, lecturing on common legal issues to high school students across Chicago’s South Side.  Through that program, he coached the mock trial teams at Hirsch Metropolitan High School in Englewood and Richards Career Academy High School in Back of the Yards.

Prior to attending Loyola, Mike graduated from Illinois State University in 2010, where he was a merit scholarship recipient and was awarded the Illinois State University Outstanding Attorney Award in both 2009 and 2010.  He was further recognized as an All-Collegiate Outstanding Attorney by the American Mock Trial Association.  While attending Illinois State, Mike worked as a clerk at Corboy & Demetrio, where he aided in the creation of an electronic docketing system as well as researched and drafted memoranda regarding liability in wrongful death actions.

After graduating from Loyola, Mike was asked to return to Loyola as an Adjunct Professor in Trial Advocacy, a position he still maintains.  As a Head Coach of the Corboy Fellowship, he led his teams to three additional championships.  He was chosen as Coach of the Year in 2016.

Mike is actively involved in the community, serving as a committee member for the Howlett Cup Committee, which facilitates an annual high school mock trial competition among a diverse group of Chicago area Catholic schools.  He was appointed to serve as the Committee’s Director in  2019.