Kenard Management Corporation, (KMC), has agreed to pay $2.7 million to the family of a man who died from injuries he sustained when he fell three stories as a result of defective metal deck railings. Attorneys Francis Patrick Murphy and Robert Bingle, partners at the law firm of Corboy & Demetrio, represented the surviving family.

On Monday, January 1, 2007, a 26 year-old young man was a guest at a friend’s apartment at 3180 North Clark Street in Chicago, Illinois, celebrating New Year’s Eve with friends from college. He and five other people at the party were on the third floor deck at the back of the apartment building. When he got up from sitting on the stairs to walk to a table, he tripped and fell head first through the metal railings of the deck to the ground below. He was subsequently taken to Illinois Masonic Hospital where he was pronounced dead. He is survived by his parents and brother.

Through extensive evidence discovery and motions to compel alleged privileged documents, it was learned that almost six months prior to the incident, KMC was alerted by its liability insurance carrier that the large gap - 2 feet by 8 feet - should be closed with a wire mesh. KMC had received bids to repair the defect but had not acted on any of them. According to plaintiff’s experts, the proposed work would have prevented the young man from falling through the porch railing system. 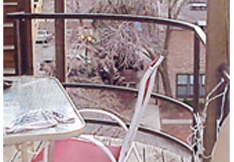 “Like all railing and porch collapses, this occurrence was preventable," said Murphy, who has represented numerous porch and deck clients over his thirty-three year career. “The defendant had been cited for a dangerous porch due to the railing gaps and had been told to repair the defect. It was on notice of a terribly dangerous condition and chose to do nothing. Michael’s death is a tragedy. His family and friends miss him tremendously.”