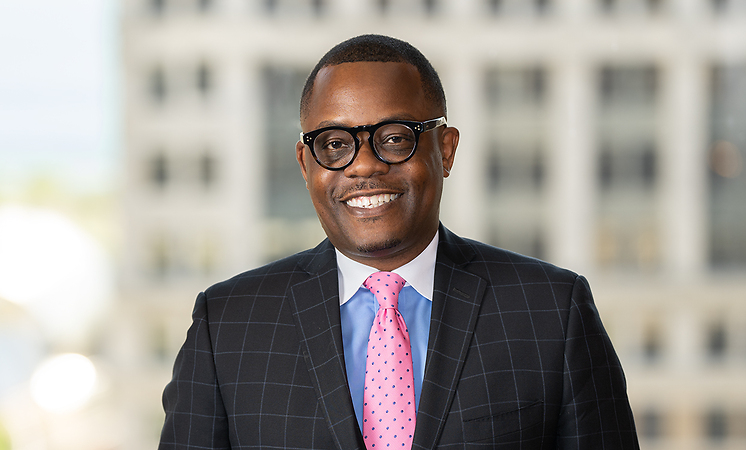 Jamaal R. Buchanan joined Corboy & Demetrio as an Associate Attorney in 2022 after prosecuting more than 100 bench trials and several jury trials as a Cook County prosecutor.

He also was personally selected to work as a Special Prosecutor within the Community Justice Center Division and assisted with Task Force cases within the Financial Crimes Unit.

Prior to that, he worked as a trial attorney at Mulherin Rehfeldt & Varchetto where he represented major insurance companies in personal injury and subrogation matters involving multiple defendants.

Mr. Buchanan has broad experience in other areas of the law, including working as an investigator for the State Bar of California’s Office of Chief Trial Counsel, reviewing and investigating ethics complaints filed against attorneys.

Also, from 2010 to 2020, Mr. Buchanan founded and ran Buchanan Management & Consulting, providing legal and business consulting services for entertainers and industry related companies and serving as Principal Manager of more than 25 actors.

Mr. Buchanan received his J.D. from Vermont Law School in 2002 following a Bachelor of Arts degree in Criminal Justice/African American Studies from Bradley University in 1999.

During his undergraduate education, Mr. Buchanan served as an intern at the City of Chicago Law Department, the Chicago Board of Elections, and the Public Defender Service in Washington D.C.

He’s served on the boards of Project Syncere, The Yellow Tractor Project, and the Erica Hubbard Foundation, and he currently serves on the board of  The Joel Hall Dancers & Center.

He has also served on the Board of Talent Managers Association, a trade association for talent managers.

In 2021, Mr. Buchanan was selected to The National Black Lawyer Top 100 – Illinois. He is the recipient – twice - of the Archbishop James P. Lyke African American Male Image Award, which he received as a student at St. Ignatius College Prep High School and again in 2015.

Mr. Buchanan is an avid Chicago sports fan who also enjoys traveling, exploring new restaurants, museum exhibits, and Chicago theatre. He is the father of four children, ages 21, 10, 6 and 2.

The Erica Hubbard Foundation, Board Member